New global supply will continue to set the tone for European petrochemicals this year while economic fences being built across the globe bring trade flow uncertainty. The long-awaited cracker and methanol capacities in other corners of the world are finally starting up and are already sending ripples to Europe. The impact translates far and wide: from delays to counterintuitive run rate decisions to further scrutiny of contract price mechanisms, massive inter-regional price gaps and deterioration of producer margins. Amid the turbulence, however, opportunities are emerging.

European olefins and polymers will be driven by US shale in the second half of 2018. And, the impact will be two-pronged. Firstly, long-anticipated supplies of polymers, manufactured from shale gas in the US, are expected to finally hit the European shores over the next few months. Such imports have been awaited by the European petrochemicals industry for more than a year and are likely to dent into profits of companies on this side of the Atlantic.

Secondly, as European petrochemicals producers face stiffer competition from overseas they are likely to choose cheaper feedstocks in an attempt to preserve their margins, especially if the oil prices continue to be firm. Hence, light cracking will continue to shape European olefins markets over the next six months.

Crude oil prices have seen a considerable increase earlier this year. More expensive crude pushed oil products, including naphtha, higher. While also rising, like naphtha, the LPG market has been suffering from a limited heating demand in winter followed by a low interest from blenders in summer – all against the background of increasing global supplies. Naphtha and LPG prices started diverging at the end of last year, and LPG has been trading at around a 14-20% discount to naphtha, though the spread has been coming off lately.

Rising gas production in the US has made it more economical for producers in Europe to ship gas feedstocks, like ethane and liquefied petroleum gases, to Europe. This change, which has emerged over the past few years, is set to disrupt the long-entrenched position of naphtha as the prime feedstock for petrochemicals production in Europe.

Exports of US-manufactured polymers into Europe will have an even bigger impact on European producers. European polyethylene converters have been delaying purchases over the past few months anticipating the arrival of the new product from America and a resulting drop in prices. According to the latest Eurostat data, imports from the US are yet to hit European markets.

Run Rates to Stay High, Despite Margins on C3 Concerns

Steam cracker margins are likely to come under increasing pressure and will become more volatile in coming months as the market adjusts to new realities and heightened geopolitical risks affecting the direction of the energy complex. Spot steam cracker margins in Europe dipped in May to the lowest level since late 2016, however they have rebounded since then, on the back of cheaper naphtha. Despite question marks over margins, European players are unlikely to resort to reducing operating rates in order to manage ethylene stocks, lest they further reduce output of co-products.

In early May, propylene spot prices already flipped to a premium to ethylene, a phenomenon that was last witnessed at the beginning of 2015. In sharp contrast, exactly a year ago, the product was trading at a discount of $200, Platts data shows. Similarly, butadiene has turned tighter in Europe in the first half too, although the end of the spring maintenances in Asia has raised the prospect of a change in direction. Butadiene is net long in Europe and its price movements tend to depend on the Asian cracker outages, which trigger exports out of Europe to meet regional demand. Every year, butadiene prices in Europe tend to change course mid-year, triggered by the opening or closing of an arbitrage between Europe and Asia.

Growing US methanol capacity is likely to soften North American spot prices in the second half of 2018 while the price outlook for Asia remains supported by delayed start-ups in Iran and continued firm demand from China’s methanol-to-olefin plants, according to industry sources. Europe is meanwhile entering the third quarter of the year with its supply-demand balance tipping from tight to balanced and despite a higher Q3 contract price settlement, spot prices began the second half of the year on a downwards trend, following highs seen in June.

US production capacity is set to grow by 30% in the second half of 2018 with a major expansion on the Gulf Coast. The new supply is expected to soften prices through the second half of the year, market sources said, extending a near 6% decline for the front month since the beginning of 2018, according to S&P Global Platts data.

US exports are increasingly competing with material from Trinidad & Tobago as well as Venezuela, both of which have lost market share in the US and will be turning to new export markets, but it will take time for trade flows to readjust, according to market sources. Venezuela producers have sought to further develop supply agreements in Asia and producers in Trinidad & Tobago will also likely target Asia more in 2019, as product competes in Europe with US exports, sources said. 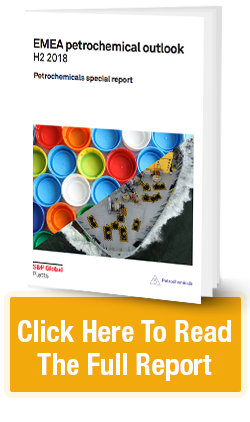 While Europe will be keeping an eye on shifting Americas trade flows in the second half of the year, the return of Russian material to the net-importing region is likely to bring the biggest near-term supply change, clouded however by ongoing uncertainty over Iranian production. European market participants expect availability to improve during Q3 from the tightness experienced in Q2, when a relatively heavy turnaround schedule was exacerbated by a reduction in Russian imports.

The European styrene market will be driven primarily by the anti-dumping duties (ADDs) imposed on Chinese styrene imports from selected countries in the second half of this year. New trade routes are likely to emerge, such as higher EU exports to China, as well as a surge in EU imports of US and South Korean volumes. However, significant logistical difficulties will pose challenges for traders, while a two tier pricing structure may emerge to accommodate forincreased availability of non-EU origin styrene. The European Union may become a large trading hub for styrene, with an increase in both exports and imports.

Over the past years, PX supply in Europe has consistently been in surplus, with the region being a net exporter throughout. The European export front has remained active subsequently in May and June, with multiple parcels of 5,000 mt heard exported, in spite of the restart of Sines. According to S&P Global Platts data, the total PX production nameplate capacity in Europe is around 2.4 million mt/year. Besides the European players, the primary beneficiaries of the increased PTA capacity in the region are likely to be Saudi, Turkish and Israeli PX producers.

MTBE faces a bleak second half in 2018 with supply woes seen earlier in the year expected to persist, especially with a lack of export sales opportunities pointing to the backlog clearing slowly. MTBE’s superiority as a blend choice has been under pressure from the sheer weight of alternative components available in the European market and the issue shows little sign of being resolved in the near term. Reformate supplies have been long and have proven to be a strong competitor against MTBE as a primary choice for blendstock.

Polyethylene terephthalate is expected to remain tight within Europe in the coming months, say market sources, as we enter the second half of the year. The lack of supply that characterized the second quarter of 2018 looks set to persist past the high season and on into Q4, with additional maintenance planned for early autumn and as issues with feedstock purified terephthalic acid continue.

While high prices are expected to endure for as long as the supply tightness continues, some relief may be seen as the high season ends and buying moves to inventory replenishing and demand becomes less urgent.

The prospect of political stability post-presidential elections in Turkey may be no more than a temporary respite for the chemicals markets, as economic uncertainty and flaccid demand look likely to define the second half of 2018. As with the first six months of the year, monetary policy will be a major factor determining the direction for polymers, however rising global supplies will start being felt in the country more acutely too.

The re-election of President Recep Tayyip Erdogan at the end of June led to the Turkish lira jumping 2.2% on the following morning, providing some relief to a country plagued recently with devaluation worries. However it may not be enough to boost a market still reeling from an extraordinarily low lira.

The Turkish market is likely to be inundated with polymer offers from the Middle East as capacity expansions continue. Iran will remain the focal point of polyethylene production capacity rise over the coming years. S&P Global Platts expects the region’s surplus to hold at around 12.4 million mt in 2018 and move to 18.6 million mt by 2028.

We use cookies on our website to give you the most relevant experience by remembering your preferences and repeat visits. By clicking “Accept”, you consent to the use of ALL the cookies. However you may visit Cookie Settings to provide a controlled consent.
Cookie settingsACCEPT
Manage consent

Any cookies that may not be particularly necessary for the website to function and is used specifically to collect user personal data via analytics, ads, other embedded contents are termed as non-necessary cookies. It is mandatory to procure user consent prior to running these cookies on your website.

Analytical cookies are used to understand how visitors interact with the website. These cookies help provide information on metrics the number of visitors, bounce rate, traffic source, etc.

Advertisement cookies are used to provide visitors with relevant ads and marketing campaigns. These cookies track visitors across websites and collect information to provide customized ads.

Performance cookies are used to understand and analyze the key performance indexes of the website which helps in delivering a better user experience for the visitors.